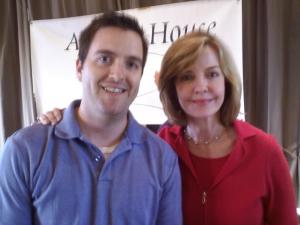 I’m what you call an amateur poet. By that I mean that, from time to time, when the mood strikes, I pen a really terrible “poem” that nobody will or should ever read. In fact, I’m hoping one day to have an entire collection of unread poetry that I can never share with anyone. Then, when I die, someone will find it, attempt to read it, see that it’s really bad, and then make sure that it’s disposed of properly. Preferably with fire. Call me a dreamer, but it could happen.

Yesterday, thanks to Robert Morris University, I got to attend a wonderful poetry event at the Schenley Park Visitors Center in Oakland. Hosted by Autumn House Press, the event was a celebration of poetry and a release party for Autumn House’s When She Named Fire: An Anthology of Contemporary Poetry by American Women by Andrea Hollander Budy.

The event also featured favorite poem readings by Toi Derricotte, professor of English at the University of Pitt; Marty McGuinn, chairman and CEO of Mellon Financial Corporation; Rick Sebak, producer for WQED Multimedia Pittsburgh; Sally Wiggin, WTAE Channel 4 Action News anchor; and some other guy named Franco Harris, who they tell me played football to some acclaim back in the 1970s.

My wife accompanied me to the reading, making us the only two people out of the hundred or so in attendance unable to recite any poem from memory other than “Roses Are Red…”

One of the more distinguished attendees was RMU’s very own Jay S. Carson, D.A., university professor of English Studies for the Department of English Studies & Communications Skills, and a pretty darn good poet in his own right. His poem, “Jay Bird,” was printed in the April 2005 edition of Paper Street Press in Pittsburgh, and “How I Would Become a Blacksmith” was in the latest edition of Hawaii Review.

It may surprise you, but RMU has a lot of talented poets right here on campus, and you can read many of their works in the university’s very own student literary magazine, Rune, which just released it’s latest issue. If you’re a poet and, unlike me, you’re willing to share your work, Rune accepts poetry, short stories, dramatic writing, and other writings along with photography and art as well. You can e-mail Jay S. Carson for more information.

I have to admit, I felt a little inspired after this event, and it gave me the confidence to share my latest poem. Let me know what you think:

Okay…so it’s a work in progress.

From: Department of English Studies and Communication Skills, poetry, Rune
← Laverne and Shirley land
The Perils of Antiquing →
No comments yet